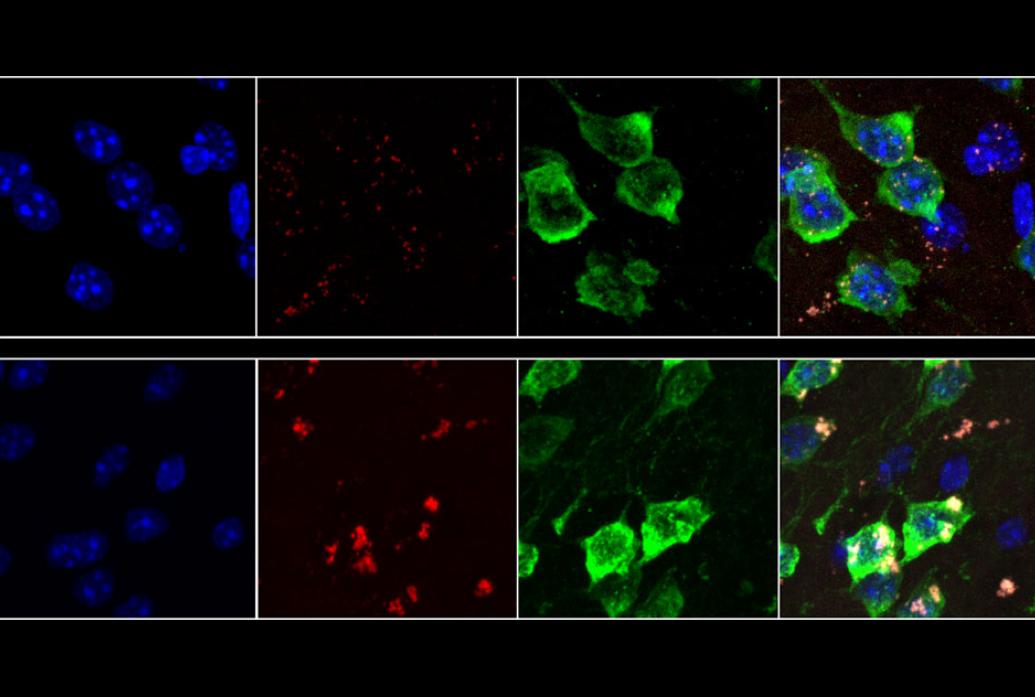 MIT biologists discover an unusual hallmark of aging in neurons

As we age, neurons in our brains can become damaged by free radicals. MIT biologists have now discovered that this type of damage, known as oxidative stress, produces an unusual pileup of short snippets of RNA in some neurons.

This RNA buildup, which the researchers believe may be a marker of neurodegenerative diseases, can reduce protein production. The researchers observed this phenomenon in both mouse and human brains, especially in a part of the brain called the striatum — a site involved in diseases such as Parkinson’s and Huntington’s.

“The brain is very metabolically active, and over time, that causes oxidative damage, but it affects some neurons more than others,” says Christopher Burge, an MIT professor of biology. “This phenomenon appears to be a previously unrecognized consequence of oxidative stress, which impacts hundreds of genes and may influence translation and RNA regulation globally.”

Burge and Myriam Heiman, a member of the Picower Institute and the Latham Family Career Development Associate Professor of Brain and Cognitive Sciences, are the senior authors of the paper, which appears in the Nov. 27 issue of Cell Reports. Peter Sudmant, a former MIT postdoc, is the lead author of the paper, and Picower Institute postdoc Hyeseung Lee and former postdoc Daniel Dominguez are also authors.

For this study, the researchers used a technique developed by Heiman that allows them to isolate and sequence messenger RNA from specific types of cells. Messenger RNA carries protein-building instructions to cell organelles called ribosomes, which read the mRNA and translate the instructions into proteins by stringing together amino acids in the correct sequence.

Heiman’s technique involves tagging ribosomes from a specific type of cells with green fluorescent protein, so that when a tissue sample is analyzed, researchers can use the fluorescent tag to isolate and sequence RNA from only those cells. This allows them to determine which proteins are being produced by different types of cells.

“This is particularly useful in the nervous system where you’ve got different types of neurons and glia closely intertwined together, if you want to isolate the mRNAs from one particular cell type,” Burge says.

In separate groups of mice, the researchers tagged ribosomes from either D1 or D2 spiny projection neurons, which make up 95 percent of the neurons found in the striatum. They labeled these cells in younger mice (6 weeks old) and 2-year-old mice, which are roughly equivalent to humans in their 70s or 80s.

The researchers had planned to look for gene expression differences between those two cell types, and to explore how they were affected by age. “These two types of neurons are implicated in several neurodegenerative diseases that are aging-related, so it is important to understand how normal aging changes their cellular and molecular properties,” Heiman says.

To the researchers’ surprise, a mysterious result emerged — in D1 neurons from aged mice (but not neurons from young mice or D2 neurons from aged mice), they found hundreds of genes that expressed only a short fragment of the original mRNA sequence. These snippets, known as 3’ untranslated regions (UTRs), were stuck to ribosomes, preventing the ribosomes from assembling normal proteins. “While these RNAs have been observed before, the magnitude and age-associated cell-type specificity was really unprecedented,” Sudmant says.

The 3’ UTR snippets appeared to originate from about 400 genes with a wide variety of functions. Meanwhile, many other genes were totally unaffected.

“There are some genes that are completely normal, even in aged D1 neurons. There’s a gene-specific aspect to this phenomenon that is quite interesting and mysterious,” Burge says.

The findings led the researchers to explore a possible role for oxidative stress in this 3’ UTR accumulation. Neurons burn a great deal of energy, which can produce free radicals as byproducts. Unlike many other cell types, neurons do not get replaced, so they are believed to be susceptible to accumulated damage from these radicals over time.

The MIT team found that the activation of oxidative stress response pathways was higher in D1 neurons compared to D2 neurons, suggesting that they are indeed undergoing more oxidative damage. The researchers propose a model for the production of isolated 3' UTRs involving an enzyme called ABCE1, which normally separates ribosomes from mRNA after translation is finished. This enzyme contains iron-sulfur clusters that can be damaged by free radicals, making it less effective at removing ribosomes, which then get stuck on the mRNA. This leads to cleavage of the RNA by a mechanism that operates upstream of stalled ribosomes.

“Sending neural signals takes a lot of energy,” Burge says. “Over time, that causes oxidative damage, and in our model one of the proteins that eventually gets damaged is ABCE1, and that triggers the production of 3’ UTRs.”

The researchers also found the same accumulation in most parts of the human brain, including the frontal cortex, which is very metabolically active. They did not see it in most other types of human tissue, with the exception of liver tissue, which is exposed to high levels of potentially toxic molecules.

In human brain tissue, the researchers found that the amount of 3’ UTRs gradually increased with age, which fits their proposed model of gradual damage by oxidative stress. The researchers’ findings and model suggest that the production of these 3' UTRs involves the destruction of normal mRNAs, reducing the amount of protein produced from the affected genes.  This buildup of 3' UTRs with ribosomes stuck to them can also block ribosomes from producing other proteins.

It remains to be seen exactly what effect this would have on those neurons, Burge says, but it is possible that this kind of cellular damage could combine with genetic and environmental factors to produce a general decline in cognitive ability or even neurodegenerative conditions such as Parkinson’s disease. In future studies, the researchers hope to further explore the causes and consequences of the accumulation of 3’ UTRs.

The research was funded by the National Institutes of Health and the JPB Foundation.

Science Alert: MIT Scientists Have Discovered an Unusual Sign of Aging Damage in The Human Brain

A new “atlas” of cells that carry blood to the brain