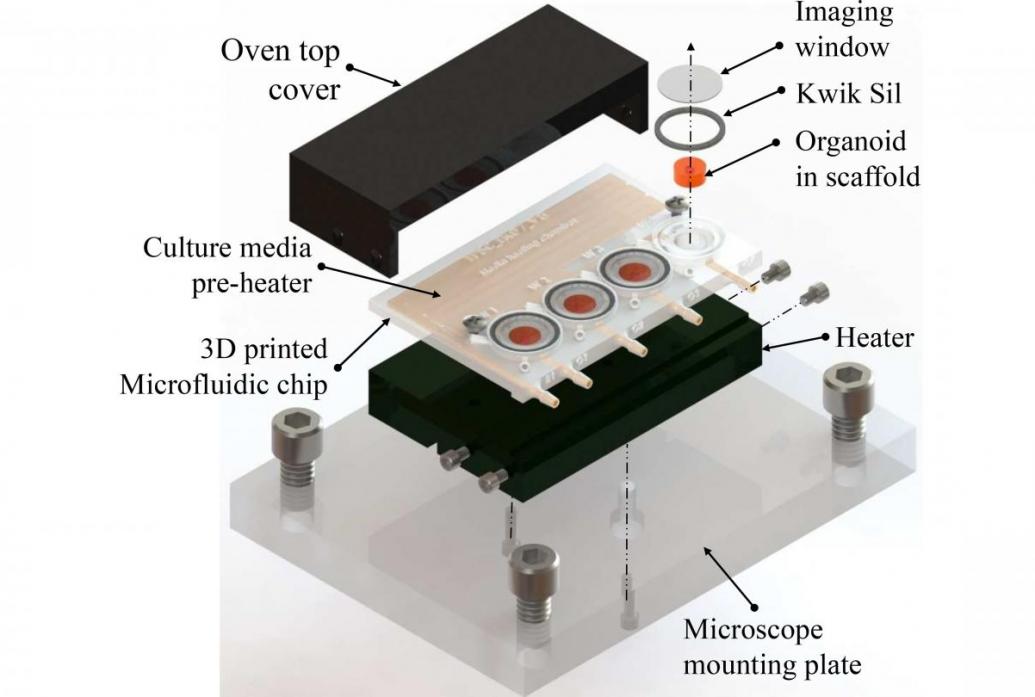 Scientists from The Picower Institute for Learning and Memory at MIT and the Indian Institute of Technology Madras have grown small amounts of self-organizing brain tissue, known as organoids, in a tiny 3D-printed system that allows observation while they grow and develop. The work is reported in Biomicrofluidics, by AIP Publishing.

Current technology for real-time observation of growing organoids involves the use of commercial culture dishes with many wells in a glass-bottomed plate placed under a microscope. The plates are costly and only compatible with specific microscopes. They do not allow for the flow or replenishment of a nutrient medium to the growing tissue.

Recent advances have used a technique known as microfluidics, where a nutrient medium is delivered through small tubes connected to a tiny platform or chip. These microfluidic devices are, however, expensive and challenging to manufacture.

The current advance uses 3D printing to create a reusable and easily adjustable platform that costs only about $5 per unit to fabricate. The design includes imaging wells for the growing organoids and microfluidic channels to provide a nutrient medium and preheating that supports tissue growth.

By efficiently growing and sustaining organoids, neuroscientists can develop powerful models of brain development, both with healthy and disease-causing genetic backgrounds, said co-author Mriganka Sur, Newton Professor in the Picower Institute and MIT's Department of Brain and Cognitive Sciences.

"The 3D printed bioreactor is an exciting new way to grow brain organoids long-term and observe their dynamics during normal and abnormal development," Sur said. "Combined with our lab’s innovative technologies for imaging organoids noninvasively in situ, this provides a new way to observe the dynamics of cortical development in organoids, and how they go awry in disorders of brain development."

Indeed, co-first author Chloé Delepine, a postdoc in the Sur Lab, is actively using the reactors for live imaging of organoids modeling Rett Syndrome, a devastating neurodevelopmental disorder and the leading known genetic cause of autism in girls.

A biocompatible type of resin used in dental surgery was used for the 3D-printed device. The printed chip was cured by exposing it to UV light, then sterilized before live cells were placed in the wells. After sealing the top of the wells with a glass slide, the nutrient medium and drugs for use in the study were added through small inlet ports.

The investigators tested their device with organoids derived from human cells. They observed the growing brain organoids with a microscope and were able to successfully follow their growth and development for seven days. The small bit of brain tissue developed a cavity or ventricle surrounded by a self-organizing structure that resembles a developing neocortex.

The percentage of cells in the core of the organoid that died during this one-week period was smaller in the 3D-printed device than in regular culture conditions. The investigators believe that their cell design protects the tiny growing brain.

Khan said, "One advantage offered by our microfluidic device is that it allows constant perfusion of the culture chamber, which more closely mimics a physiological tissue perfusion than conventional culture, and thus reduces cell death at the organoid core."

The investigators hope to increase the capacity of their device by scaling up the number of available wells. Other improvements will allow for additional instruments to be integrated into the design.

In addition to Sur, Delepine and Khan the paper's other authors are Anil Prabhakar, Hayley Tsang, and Vincent Pham.

Sources of support for the study include the National Institutes of Health, the Centre for Computational Brain Research at IIT Madras, and the JPB Foundation.

--Text adapted from the American Institute of Physics