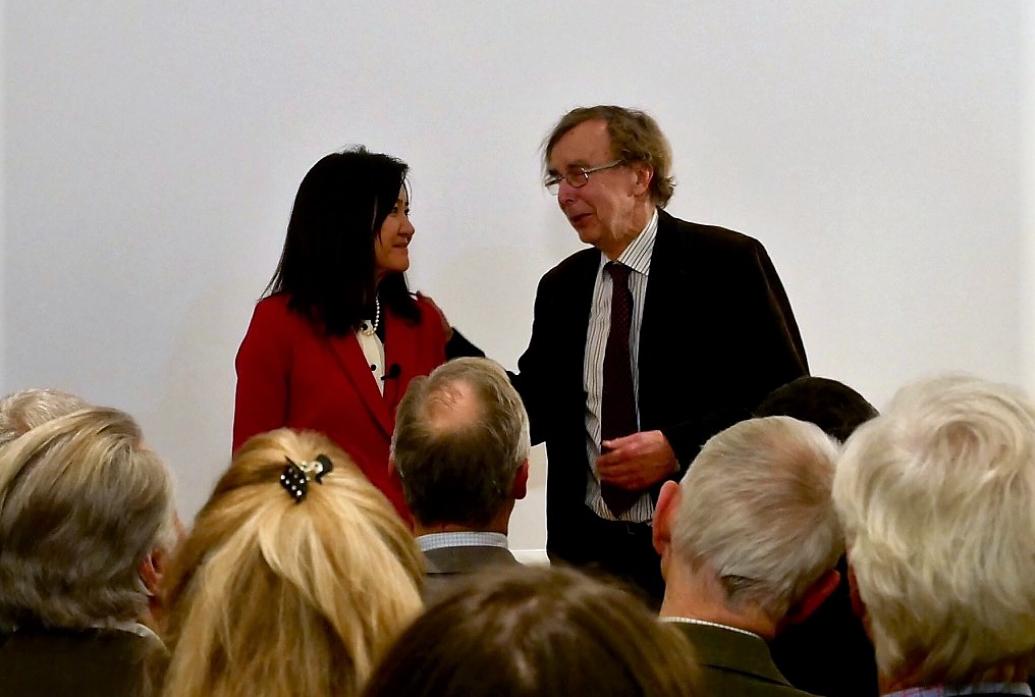 The Hans Wigzell Research Foundation announced Jan. 23 that neuroscientist Li-Huei Tsai, Picower Professor and director of The Picower Institute for Learning and Memory at MIT, is the winner of The Hans Wigzell Research Foundation Science Prize for 2018. Tsai will travel to Stockholm to receive the prize and deliver a lecture on her research Feb. 14.

“The prize is given to professor Li-Huei Tsai for her innovative research in trying to understand the etiology and possible treatment of Alzheimer´s disease,” the Foundation stated in the announcement of the $100,000 prize. “Professor Tsai has in her research made a series of impressive findings with regard to this disease.”

Above: Tsai shares a word with Wigzell while the audience looks on at her prize lecture Feb. 14.

In decades of research with collaborators, postdocs and students, Tsai has led several fundamental and translatable discoveries about biological mechanisms underlying neurodegeneration including specific aberrations in epigenetic gene regulation, enzyme pathways and repair of DNA damage. Tsai and collaborators have also uncovered substantial evidence that impaired neuronal synchrony may underlie Alzheimer’s progression, an insight that has allowed her to demonstrate a non-invasive treatment approach using light and sound stimuli to drive neural oscillations, engage the brain’s immune system, reduce pathology, and improve functionality in multiple mouse models. Testing of the technique has recently begun in humans.

“This treatment has resulted in dramatic improvements of the diseased animals both with regard to pathology and performance,” the foundation noted. “Her research has rapidly resulted in the start of advanced, clinical trials in Alzheimer’s patients.”

Tsai, who also directs the Aging Brain Initiative at MIT, said she was honored to earn the Wigzell Foundation’s recognition. Hans Wigzell is a former President of the Karolinska Institute and Chairman of the Nobel Prize Committee of the Institute.

“I am deeply grateful to Professor Wizgell and the Foundation for this award,” Tsai said. “The prize provides my team with great inspiration and resources to continue our work to understand the biology of neurodegeneration and to translate our findings to effective treatments for Alzheimer’s and other diseases.”

Down syndrome symposium highlights potential progress at many scales

November 14, 2019
Events
Down syndrome symposium highlights potential progress at many scales
The inaugural symposium of the Alana Down Syndrome Center
Read more