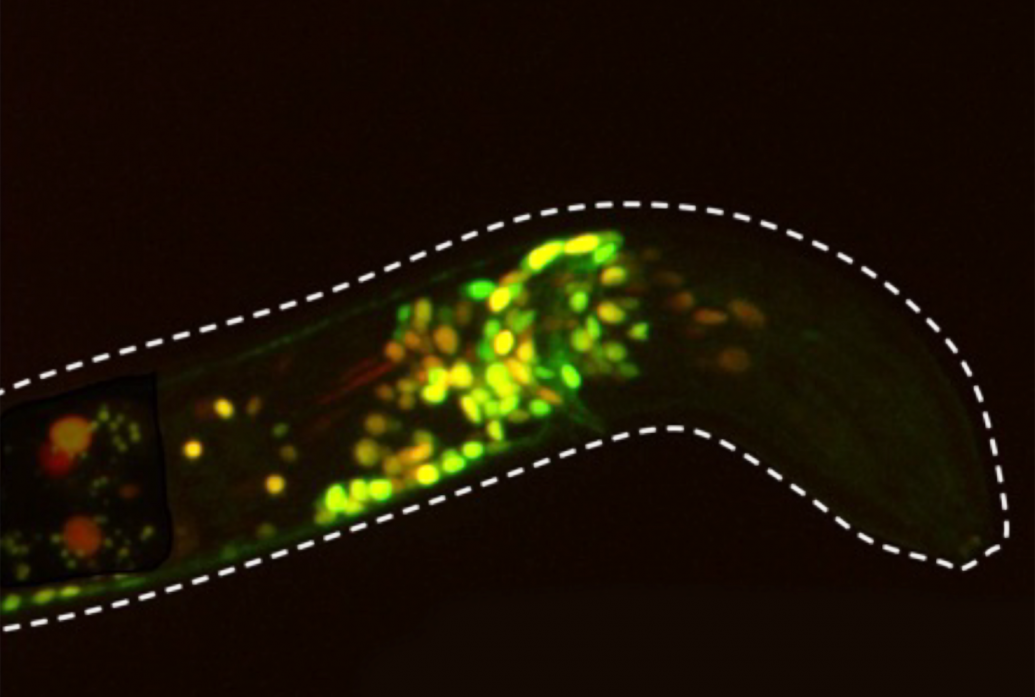 With sophisticated tools in a simple model, scientists aim to learn how serotonin modulates behavior

In popular experience the story of how serotonin modulates the brain might seem simple: pop an antidepressant, serotonin levels go up, mood improves. But neuroscientists acknowledge how little they know about how the neurotransmitter affects circuits and behavior in the incredibly complex human brain. To reveal the basics of how serotonin really works, scientists at MIT’s Picower Institute for Learning and Memory, funded by a new $1.16 million, four-year grant from the National Institutes of Health, will employ a far simpler model: the nematode worm C. elegans..

Though it is tiny, transparent and sports a nervous system with only 302 neurons, C. elegans is a powerful system for studying how serotonin modulates brain states, said the grant’s principal investigator Steven Flavell, Lister Brothers Career Development Professor in the Picower Institute and assistant professor in the Department of Brain and Cognitive Sciences. C. elegans and mammals share much of the same basic molecular machinery for emitting and receiving serotonin. But unlike in a mammal, all the neurons and their connectivity has been precisely mapped out in C. elegans and scientists can exert powerful genetic control over each cell, including those that express each of the worm’s five distinct serotonin receptors. Moreover, Flavell’s lab has developed an innovative imaging system that can reliably image the calcium activity of virtually every neuron in real time, even as a worm freely slithers and wriggles around in response to experimental manipulations.

Essentially, Flavell’s team can take nearly full control of the worm’s serotonergic system and simultaneously observe the response of virtually every neuron in the whole brain. This gives them needed capabilities that aren’t available in mammals to figure out how varying patterns of serotonin release can stimulate distinct receptors (or combinations of them) on a multitude of neurons in a variety of circuits to modulate different behaviors.

Above: The Flavell lab has developed the ability to image the activity of virtually every C. elegans neuron in real-time, even in a freely moving and behaving worm. Here green GCaMP staining indicates neural activity while red mCherry labels all cells.

“By taking advantage of a well-defined paradigm for serotonergic function and cutting-edge imaging technologies, we are well positioned to examine how patterned serotonin release activates distinct receptor types throughout a circuit to change the large-scale activity patterns that give rise to behavior,” Flavell said.

In December 2018, Flavell’s lab published a paper in Cell showing how a particular C. elegans neuron called NSM senses when a worm has started feeding on bacteria and signals other neurons via serotonin to slow the worm down to savor the meal. Since then, his lab has studied how manipulating NSM’s serotonin release patterns affects the worm’s slowing behavior and has begun to map out which serotonin receptors on which neurons play a role in those effects, for instance by genetically knocking out individual receptors, or combinations of receptors, to see what changes.

With the new grant, the lab will expand on these studies and go well beyond to systematically achieve three aims: mapping out which combinations of serotonin receptors mediate serotonin’s effect on behavior and identifying the exact neurons where they function; analyzing how serotonin alters whole-brain activity; and determining how serotonin-responsive circuits and whole brain activity differs when worms must balance aversive stimuli with appetitive food cues. While the first two sets of experiments will elucidate how the brain deploys serotonin to modulate behavior, the third aim will show how those dynamics change in more complex environments.

September 6, 2022
Research Findings
Simple animal model reveals how environment and state are integrated to control behavior
A new study shows how stimuli and states such as smells, stressors and satiety converge in an olfactory neuron to guide food-seeking behavior
Read more
Research Article

At a research forefront, young scholar looks ahead to graduate school, chance to mentor others

August 15, 2022
Picower People
At a research forefront, young scholar looks ahead to graduate school, chance to mentor others
As he works to solve an advanced problem at the intersection of computing and neurobiology, Picower Institute post-baccalaureate scholar Eric Bueno is also thinking of how he could pay his experience forward
Read more

September 20, 2021
Research Feature
'What Were you Thinking?'
How brain circuits integrate many sources of context to flexibly guide behavior
Read more
From: https://picower.mit.edu/news/sophisticated-tools-simple-model-scientists-aim-learn-how-serotonin-modulates-behavior