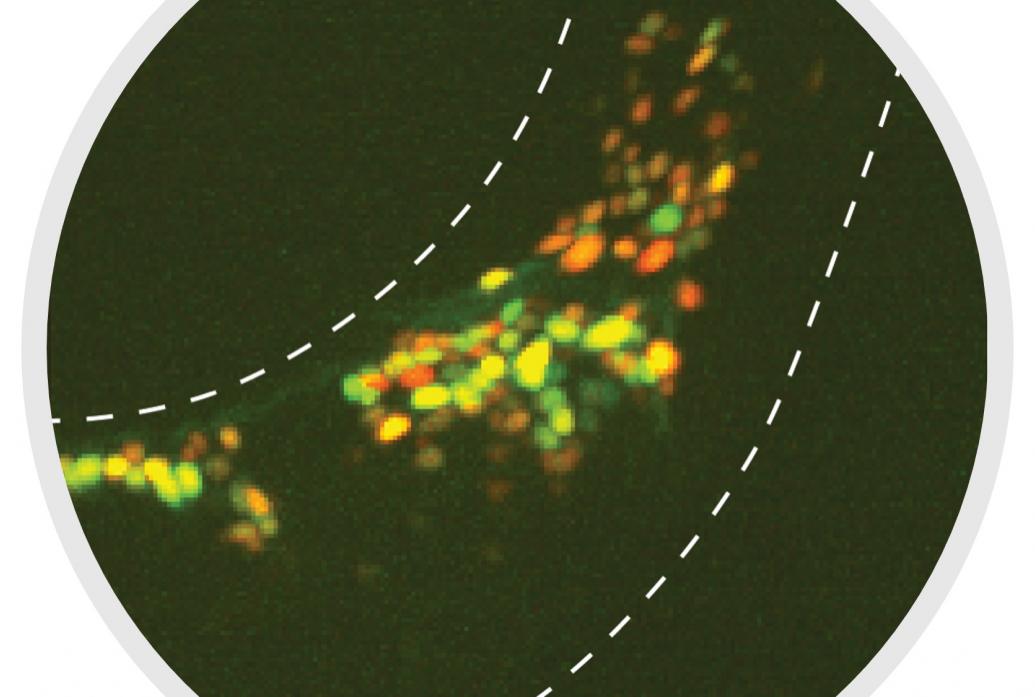 By integrating multiple sensory inputs, a loop of mutual inhibition among a small set of neurons allows worms to switch between long-lasting behavioral states.

MIT neuroscientists have discovered the elegant architecture of a fundamental decision-making brain circuit that allows a C. elegans worm to either forage for food or stop to feast when it finds a source. Capable of integrating multiple streams of sensory information, the circuit employs just a few key neurons to sustain long-lasting behaviors, and yet flexibly switch between them as environmental conditions warrant.

“For a foraging worm, the decision to roam or to dwell is one that will strongly impact its survival.” said study senior author Steven Flavell, Lister Brothers Career Development Associate Professor in The Picower Institute for Learning and Memory and Department of Brain and Cognitive Sciences at MIT. “We thought that studying how the brain controls this crucial decision-making process could uncover fundamental circuit elements that may be deployed in many animals’ brains.”

This approach of studying simple invertebrates to gain basic insights into how the brain functions has a long tradition in neuroscience, Flavell said. For example, studies of how a squid nerve propagates electrical impulses led to the key insight explaining how brain cells fire in virtually all animals.

Though the critical component of brain circuitry identified by Flavell and colleagues may seem simple now that it has been revealed, finding it was anything but easy. Lead author Ni Ji, a postdoc in Flavell’s lab, used several advanced technologies, including one of the lab’s own inventions, to figure it out. The results of her and her co-authors’ work appear in the journal eLife.

Above: To keep constant track of neural activity, as indicated by calcium-triggered flashes of light, the Flavell lab invented a microscope that tracks worms as they move.

C. elegans is a popular model in neuroscience because it only has 302 neurons and the “wiring diagram,” or connectome, has been fully mapped. But even so, the very dense and overlapping interconnectedness among those neurons, plus their ability to signal each other via chemicals called neuromodulators, means that one can hardly just look at the connectome and discern how it switches between different states of behavior.

To identify functional circuitry amid this web of connections, Flavell’s lab developed a new microscope capable of tracking the worms as they move around, thereby constantly imaging the activity of neurons across the worm’s brain, as indicated by calcium-triggered flashes of light. Ji used the scope to focus on 10 interconnected neurons involved in foraging, tracking their patterns of neural activity associated with roaming or dwelling behaviors.

Ji and co-authors trained software that learned the patterns so well that just based on neural activity, it could predict the worm’s behavior with 95 percent accuracy. The analysis revealed a quartet of neurons whose activity was specifically associated with roaming. Another key pattern was that the transition from roaming around to stopping to dwell always followed activation of a neuron called NSM.  Flavell’s lab previously showed that NSM can sense the presence of newly ingested food and emit a neuromodulator called serotonin to signal other neurons to slow the worm down to dwell in a nutritive area.

Having identified the activity patterns that changed as the worm switched states, Ji began manipulating neurons in the circuit to understand how they interact. To confirm NSM’s role as the trigger of the dwelling state, Ji engineered it to be artificially activated with a flash of light (a technique called optogenetics). When she flashed the light, it caused the worm to dwell by inhibiting the activity of the roaming-associated neurons. Further experiments showed that this inhibitory power depended on the roaming neurons having an inhibitory serotonin receptor, called MOD-1. If Ji genetically knocked out the MOD-1 receptor, NSM couldn’t inhibit the roaming behavior and quickly stopped trying for lack of feedback.

Similarly, Ji showed that when the worm was roaming, it was because the roaming quartet was using the neuromodulator PDF to inhibit the activity of NSM. Optogenetic activation of PDF-expressing neurons tamped down NSM activity, for instance.

In a normal worm, if the roaming quartet was active NSM was not and vice versa. But when Ji genetically knocked out the circuit elements that underlie this mutual inhibition both the roaming quartet and NSM could be active at the same time, leaving the worm in a weird state of meandering around at about half of roaming speed.

So via an ongoing battle of mutual inhibition, roaming is sustained by the quartet and dwelling is sustained by NSM, but that still begged the question: How does the worm decide to flip the switch? To find out, Ji and colleagues programmed a machine learning algorithm to discern which neurons might work upstream in the broader circuit to influence the serotonin and PDF tug of war. This approach identified a neuron called AIA, which is known for integrating sensory information about food odors. AIA’s activity co-varied with a couple of the roaming neurons during roaming, and with NSM when dwelling began.

In other words, upon becoming activated by the smell of food, AIA could use its input to drive either side of the mutual inhibitory circuit to switch behavior. Remembering that NSM can sense when the worm is actually eating, Ji and Flavell could deduce what AIA and NSM must be doing. If the worm smells food but is not eating, it needs to roam further to that food smell until it is. If the worm smells food and at the same time it begins eating, then it should continue to dwell there.

“To a foraging worm, food odors are an important, but ambiguous, sensory cue. AIA’s ability to detect food odors and to transmit that information to these different downstream circuits, dependent on other incoming cues, allows animals to contextualize the smell and make adaptive foraging decisions,” Flavell said. “If you are looking for circuit elements that could also be operating in bigger brains, this one stands out as a basic motif that might allow for context-dependent behaviors.”