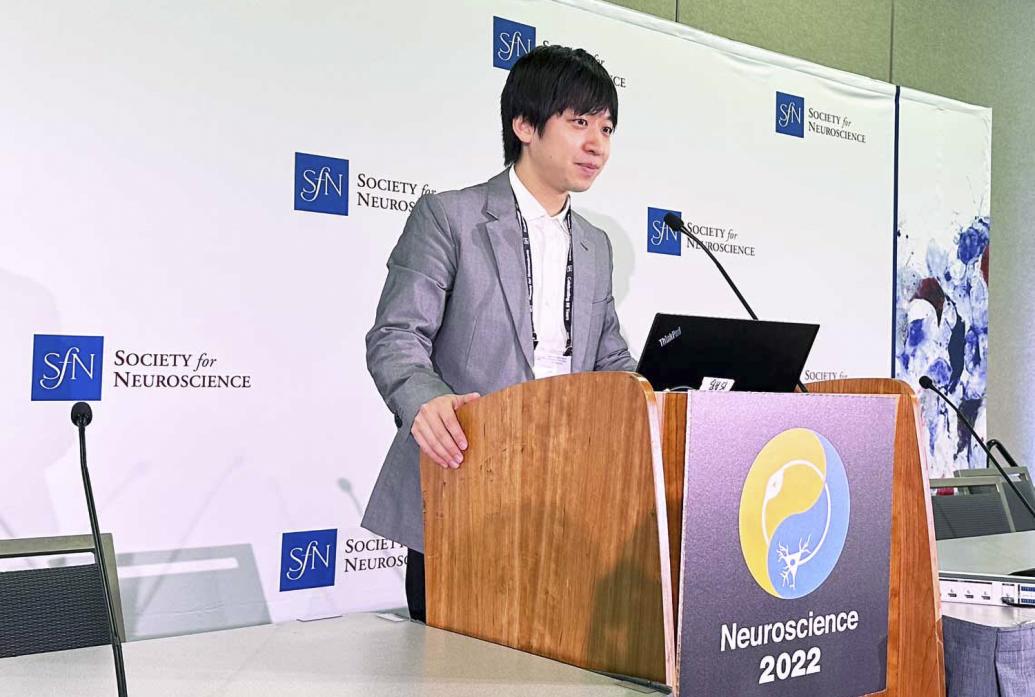 At a press conference at the Society for Neuroscience Annual Meeting, young Picower scientist Takato Honda presented findings of key neurons involved in the neuropsychiatric disorder and sleep homeostasis

To better understand and treat mental health disorders, neuroscientists seek the underlying mechanisms in the brain that cause their symptoms. At a press conference at the Society for Neuroscience Annual Meeting in San Diego Nov. 13, Takato Honda, Picower Fellow in the MIT Picower Institute lab of Sherman Fairchild Professor Matthew Wilson, presented research indicating that a specific cell type in a particular region of the brain is directly involved in the mania symptoms of bipolar disorder and that the disorder’s sleep symptoms are further mediated by dopamine.

Individuals with bipolar mania persistently experience hyperactivity, elevated mood, and decreased need for sleep. However, neuronal populations involved in the manic state have not been well understood.

But recently Honda and colleagues, in collaboration with International Institute for Integrative Sleep Medicine (WPI-IIIS) at University of Tsukuba, have shown that the manic states seen in patients with bipolar were recapitulated in mice if they ablated neurons in the ventral midbrain/pons (VMP) region that produce the inhibitory neurotransmitter GABA. To reveal the physiological functions of VMP GABAergic neurons, Honda designed and performed a comprehensive behavioral test battery. The mice with loss of VMP GABAergic neurons exhibited hyperactivity, anti-depressive behaviors, reduced anxiety, and largely shortened sleep time.

“Using mice as a model system, we have newly identified that GABAergic neurons located in the ventral midbrain pons area are involved in the expression of mania-like behaviors,” Honda said at the press conference. “And in our poster session, we also have some preliminary data that clinically used drugs have certain recovery effects on the facets of mania-like behaviors in these animals.”

Honda discussed the work with journalists (an opportunity given to less than 50 presenters out of a pool of more than 12,000 submitted abstracts) as part of a panel of scientists presenting work on connections between anxiety and sleep problems, which is a problem that is increasing worldwide. Mania is characterized by a stark reduction of anxiety but creates its own sleep dysfunction.

By making the additional finding that knocking out dopamine D2 receptors mediate daytime sleep loss without affecting the other mania-like behaviors, Honda and colleagues dissected the mechanisms leading to the different behavioral symptoms.

“Our data demonstrate that VMP GABAergic neurons are involved in the expression of mania-like behaviors, which can be segregated to the short-sleep and other phenotypes on the basis of the dopamine D2 receptors,” Honda said.

The importance of the findings, as Honda described them, is that they establish a potentially useful mouse model for not only understanding how mania symptoms may emerge, but also how treatments for mania and sleep loss work and could work better.

Strikingly, they also found that the loss of VMP GABAergic neurons induced the loss of rebound sleep after sleep deprivation. Honda said, “Our study may provide insights into the understanding of important questions in both basic sleep biology and sleep medicine, such as the mechanism of sleep homeostasis, the pathophysiology of bipolar disorder, and potentially the mechanism of action of clinically used drugs.”