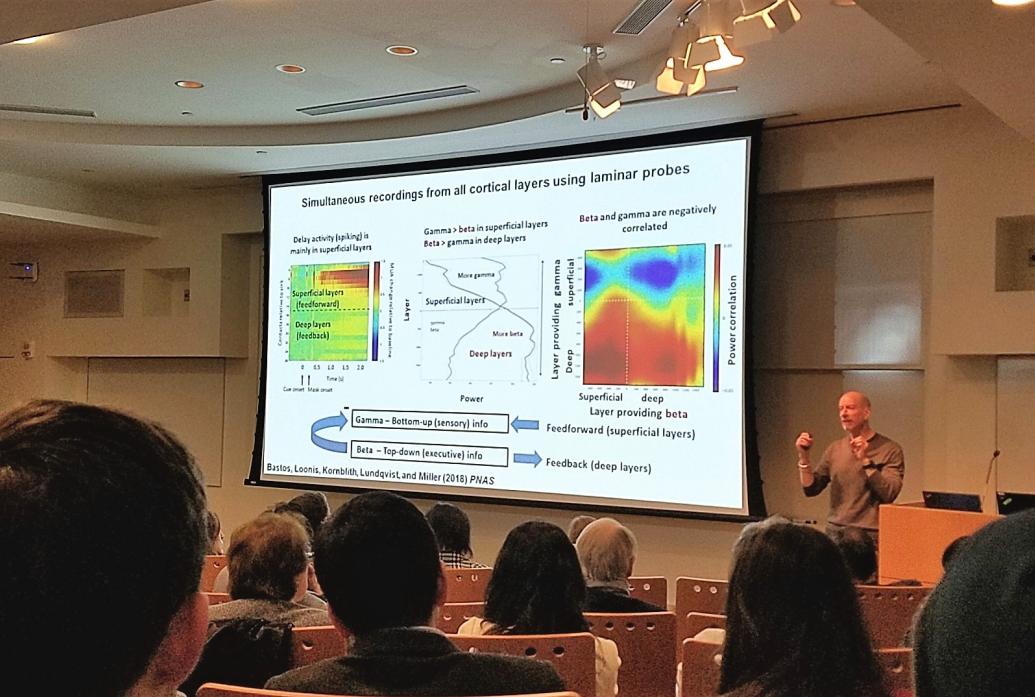 Important because it is mundane, working memory gets us through every day by allowing us, for instance, to follow the receptionist’s directions to find the doctor’s office, or to sort through the costs and benefits of one set of tires vs. another at the dealership. It’s also profoundly debilitating when it is diminished by disorders such as schizophrenia or autism. But MIT neuroscientist Earl Miller also sees a grandeur in working memory. It’s a system for our minds to exert our will over sensory information.

“What’s special about working memory is that it is volitional,” said Miller, Picower Professor in the Picower Institute for Learning and Memory at MIT. “It is the main mechanism by which your brain wrests control from the environment and puts it under its own control. Any simple creature can just react to the environment. But what higher order animals have evolved is the ability to take control over their own thoughts.”

If only neuroscientists knew how the brain did that. Motivated by that question and by a desire to help people in whom the system is not functioning properly, Miller has been studying how working memory works for more than 20 years. Now, in the 30th Anniversary edition of the journal Neuron, Miller and co-authors Mikael Lundqvist and Andre Bastos present a new model of working memory that explains how the brain holds information in mind (the “memory” part) and also executes volitional control over that (the “working” part).

“This model brings together the maintenance and volition of working memory,” Miller said.

Rocking the boat with waves

Essentially the model posits that the brain operates working memory by coordinating ensembles of cells, or neurons, in the cortex with timely bursts of activity at the frequencies of specific brain waves. In the model, waves in the low “alpha and beta” frequencies carry our knowledge and goals in the situation (e.g. “I need tires that will last a long time but don’t want to pay more than $400.”) and regulate the higher frequency “gamma” waves that handle the new sensory information to be stored and manipulated, (e.g. the salesperson’s pitch that Tire set A will last 45,000 miles and cost $360, and tire set B will last 60,000 miles and cost $420). Meanwhile the temporary storage of that sensory information is achieved by how the interplay of these rhythmic waves changes the weight of connections among the neurons, called synapses.

The new paper summarizes several lines of experimental evidence supporting the model, including from papers Miller’s lab published earlier this year in the Proceedings of the National Academy of Sciences and Nature Communications and in 2016 in Neuron. The evidence, and the model itself, challenges at least two classically held beliefs among neuroscientists. One is that brainwaves are merely byproducts of neural activity and don’t have functional meaning, and the other is that working memory is maintained by a persistent hum of neural firing, rather than short, coordinated bursts. But newer and more sophisticated techniques of analysis and measurement of neural activity amid working memory experiments in lab animals have shown otherwise, Miller, Lundqvist and Bastos write.

For instance, in the Nature Communications paper, led by Lundqvist, the team showed the functional consequences of the different frequencies of waves. Animals were trained to play a game where they saw a sequence of two images and had to judge whether the next sequence of two had the same images in the same order. Recordings of neural activity showed a specific pattern of interplay between the wave frequencies, in which beta would decline to allow gamma to increase when information needed to be stored or read out. Beta would then increase and gamma would die down when information could be discarded. More strikingly, the researchers could see that deviations from this pattern correlated strongly with animals making mistakes. From specific deviations the scientists could even tell if the animal subsequently made the wrong decision based on the first or second of the test images.

“This adds to mounting evidence that brain waves have a major functional role in the brain,” Miller said.

In the PNAS paper, led by Bastos, the researchers not only measured this same kind of pattern of brainwave control, but also showed that the governing alpha and beta waves originate from deeper layers of the prefrontal cortex, while gamma waves originate in more superficial layers, just as neuroscientists had previously observed in the visual cortex.

“This model brings together the maintenance and volition of working memory,” Miller said.

Some of the lab’s newest data, not yet published, suggests that this interplay of “top down” alpha-beta rhythms exerting executive control of “bottom up,” sensory-oriented gamma rhythms may be widespread around the cortex, therefore potentially governing other related functions such as attention.

In all, the paper provides researchers a path to follow to advance the study of working memory, said Sabine Kastner, professor of psychology and neuroscience at Princeton University.

“The review by Earl Miller and colleagues provides a beautiful synthesis putting forward a theory for working memory function from the level of neural circuits to neural ensembles at the brain’s large-scale,” she said. “While many aspects of this theory need to be linked more closely to behavior, Miller’s account provides a roadmap for the future of the working memory field.”

Indeed, Miller said his lab is asking new questions of the model both to explore the finer workings of working memory and also to find ways that it might be therapeutically enhanced for the treatment of psychiatric disease. Miller said the team is interested in determining how the model might explain how information can be reordered or sliced and diced in other ways. The lab is also working on systems to read out and, in real time, correctively stimulate rhythms in the prefrontal cortex to enhance working memory function.

With further research, the model may tell.

Miller will present this model at the 14th International Workshop on Advances in Electrocorticography in San Diego on November 2.

He will also be a panelist at Cell Press Conversations: “The State of the Mind 2018” panel event in San Diego on November 3.

The National Institute of Mental Health, the Office of Naval Research, the Picower Fellows Program and the MIT Picower Institute Innovation Fund have supported the research.

TrendInTech: How Working Memory Allows You To Take Control Over Your Own Thoughts
NPR: Neuroscientists debate a simple question: How does the brain store a phone number?