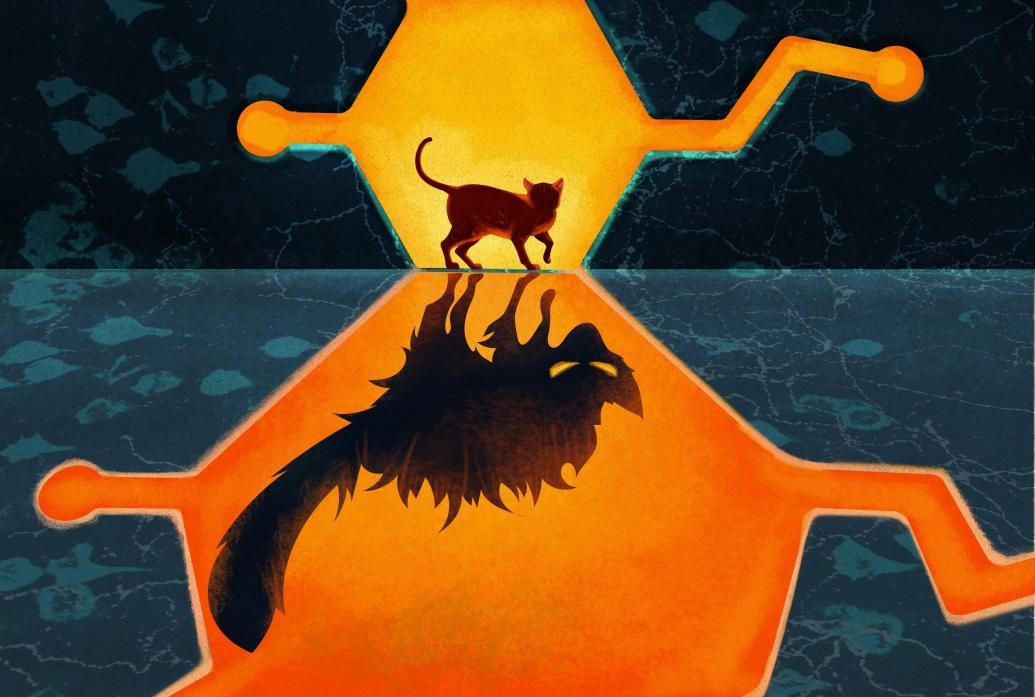 Imagine a herd of deer grazing in the forest. Suddenly, a twig snaps nearby, and they look up from the grass. The thought of food is forgotten, and the animals are primed to respond to any threat that might appear.

MIT neuroscientists have now discovered a circuit that they believe controls the diversion of attention away from everyday pursuits, to focus on potential threats. They also found that dopamine is key to the process: It is released in the brain’s prefrontal cortex when danger is perceived, stimulating the prefrontal cortex to redirect its focus to a part of the brain that responds to threats.

“The prefrontal cortex has long been thought to be important for attention and higher cognitive functions (planning, prioritizing, decision-making etc.). It’s as though dopamine is the signal that tells the router to switch over to sending information down the pathway for escape-related behavior,” says Kay Tye, an MIT associate professor of brain and cognitive sciences and a member of MIT’s Picower Institute for Learning and Memory.

When this circuit is off-balance, it could trigger anxious and paranoid behavior, possibly underlying some of the symptoms seen in schizophrenia, anxiety, and depression, Tye says.

Tye is the senior author of the study, which appears in the Nov. 7 issue of Nature. The lead authors are former graduate student Caitlin Vander Weele, postdoc Cody Siciliano, and research scientist Gillian Matthews.

Above: The threat of a cat is magnified by dopamine (shown in molecular form). Credit: Elijah Lee/Biorender.io

One major role of the prefrontal cortex, which is the seat of conscious thought and other complex cognitive behavior, is to route information to different parts of the brain.

In this study, Tye identified two populations of neurons in the prefrontal cortex, based on other brain regions that they communicate with. One set of neurons sends information to the nucleus accumbens, which is involved in motivation and reward, and the other group relays information to the periaqueductal gray (PAG), which is part of the brainstem. The PAG is involved in defensive behavior such as freezing or running.

When we perceive a potentially dangerous event, a brain region called the ventral tegmental area (VTA) sends dopamine to the prefrontal cortex, and Tye and her colleagues wanted determine how dopamine affects the two populations they had identified. To achieve that, they designed an experiment where rats were trained to recognize two visual cues, one associated with sugar water and one with a mild electrical shock. Then, they explored what happened when both cues were presented at the same time.

They found that if they stimulated dopamine release at the same time that the cues were given, the rats were much more likely to freeze (their normal response to the shock cue) than to head for the port where they would receive the sugar water. If they stimulated dopamine when just one of the cues was given, the rats’ behavior was not affected, suggesting that dopamine’s role is to enhance the escape response when the animals receive conflicting information.

“The reward-associated neurons drop their spiking by a substantial amount, making it harder for you to pay attention to a reward,” Tye says.

Further experiments suggested that dopamine acts by adjusting the signal-to-noise ratio in neurons of the prefrontal cortex. “Noise” is random firing of neurons, while the “signal” is the meaningful input coming in, such as sensory information. When neurons that connect to the PAG receive dopamine at the same time as a threatening stimulus, their signal goes up and the noise decreases. The researchers aren’t sure how this happens, but they suspect that dopamine may activate other neurons that help to amplify the signals already coming into the PAG-connected neurons, and suppress the activity of neurons that project to the nucleus accumbens.

This brain circuit could help give animals a better chance of surviving a threatening situation, Tye says. Any kind of danger sign, such as the snapping twig that startles a herd of deer, or a stranger roughly bumping into you on the sidewalk, can produce a surge of dopamine in the prefrontal cortex. This dopamine then promotes enhanced vigilance.

“You would be on the defensive,” Tye says. “There may be some times that you run when you don’t need to, but more often than not, it might make sense to turn your attention to a potential threat.”

Dysregulation of this dopamine-controlled switching may contribute to neuropsychiatric disorders such as schizophrenia, Tye says. Among other effects, too much dopamine could lead the brain to weigh negative inputs too highly. This could result in paranoia, often seen in schizophrenia patients, or anxiety.

Tye now hopes to determine more precisely how dopamine affects other neurotransmitters involved in the modulation of the signal-to-noise ratio. She also plans to further explore the role of this kind of modulation in anxiety and phobias.

How the brain responds to surprising events

June 1, 2022
Research Findings
How the brain responds to surprising events
Unexpected outcomes trigger release of noradrenaline, which helps the brain focus its attention and learn from the event
Read more
Research Article

March 14, 2022
Research Feature
The model remodeler
A Picower Institute primer on ‘plasticity,’ the brain’s amazing ability to constantly adapt to and learn from experience
Read more
From: http://picower.mit.edu/news/dopamine-primes-brain-enhanced-vigilance