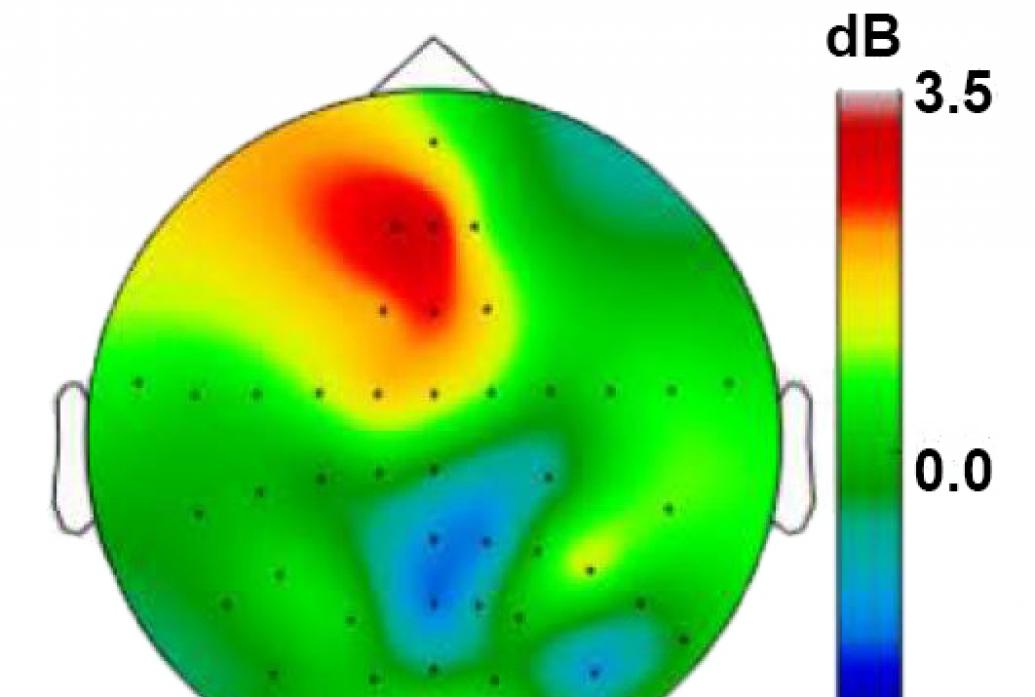 In a new study that could improve the therapeutic efficacy of deep-brain stimulation (DBS) for psychiatric disorders such as depression, a team of scientists shows that when DBS is applied to a specific brain region, it improves patients’ cognitive control over their behavior by increasing the power of a specific low-frequency brain rhythm in their prefrontal cortex.

The findings, published April 4 in Nature Communications, suggest that the increase in “theta” rhythms, readily detectable in EEG recordings, could provide neurosurgeons and psychiatrists with the reliable, objective and rapid feedback they’ve needed to properly fine-tune the placement and “dosage” of DBS electrical stimulation. In Parkinson’s disease, where DBS has been most successful, that kind of feedback is available through a reduction in a patient’s tremors. But for depression or obsessive-compulsive disorder, symptoms can be more subtle, subjective and slowly emergent.

“This is a major step forward for psychiatric brain stimulation,” said Alik Widge, the lead and corresponding author on the paper. Widge began the work while a Picower Clinical Fellow at the Picower Institute for Learning and Memory at MIT and a research fellow at Massachusetts General Hospital (MGH). He is now an assistant professor of psychiatry at the University of Minnesota Medical School. “This study shows us a specific mechanism of how DBS improves patients’ brain function, which should let us better identify who can benefit and how to optimize their individual treatment.”

Above: Researchers saw sharp increases in the power of theta frequency rhythms (warmer colors) in the frontal cortex as volunteers performed an experimental task.

Heading into the research, the team, also led by Earl Miller, Picower Professor of Neuroscience at MIT and Darin Dougherty, Associate Professor of Psychiatry at Harvard Medical School and Director of the Division of Neurotherapeutics at MGH, knew that DBS applied to the brain’s ventral internal capsule and ventral striatum (VCVS) has shown mixed results in treating OCD and depression. A common feature of both conditions is a deficit of cognitive control, the function of controlling automatic or habitual behaviors through conscious will (for instance, overcoming recurring negative emotions that are a hallmark of depression). Cognitive control is performed in part by the prefrontal cortex, which is involved in circuits passing through the VCVS region. Moreover, theta rhythms are believed to be a means by which neurons in the prefrontal cortex could synchronize and drive the activity of neurons in other regions.

The team’s working hypothesis, therefore, was that DBS might help patients by increasing theta rhythms in these crucial cognitive control circuits linking prefrontal cortex to VCVS, thereby allowing the cortex to be more effective in controlling atypical emotions. If they could read out a patient’s theta rhythms and optimally amplify those with DBS, they reasoned, maybe they’d see an increase in cognitive control.

To find out, they worked with 14 volunteers at MGH, 12 of whom had previously received DBS treatment for depression and the other two for OCD. The researchers gave each participant a “conflict” task in which they had to identify the numeral in a sequence of three numbers that was different (like the “2” in “332”) despite the vivid and intentional background distraction of an emotionally evocative image (like adorable puppies or a vicious shark). An increase in cognitive control would mean a quicker reaction time in being able to identify the correct unique digit.

The researchers recorded brain waves of the subjects while they performed the task, once with DBS switched on and once with it off. What they found was that with DBS on, people indeed made their selection faster (overcoming the “interference,” or conflict of the emotional picture). There was no difference in accuracy, meaning that subjects were not sacrificing accuracy to gain more speed. Meanwhile theta rhythms in the cortex increased markedly in association with both the stimulation in VCVS and the behavioral improvement of the faster reaction time.

“This study demonstrates the value of closed-loop stimulation,” Miller said. “We read the brain's natural rhythms and then enhanced them by stimulation.  We augmented the rhythms that were already there.  It suggests that brain rhythms play a role in cognition and that we can treat cognitive deficits by manipulating those rhythms.”

The authors acknowledged that the study was relatively small, and because all of the participants were receiving DBS as a treatment, the exact stimulation settings were different between individual participants. Widge cautioned that a more standardized study would be important to verify the results. However, the authors said that with further research, theta rhythms could provide a biomarker to calibrate DBS treatments for psychiatric disorders where cognitive control is crucial. Moreover, individual tuning of theta rhythms via DBS of the VCVS could lead to new treatments for psychiatric disorders where cognitive control – and the flexibility of behavior that comes from exerting conscious intent over recurring emotions or compulsions – is crucial.

“The current study demonstrates that DBS at an FDA approved target for psychiatric illness is shown to affect a specific symptom underlying multiple psychiatric illnesses, namely cognitive flexibility,” Dougherty said. “These findings suggest that looking at effects of DBS ‘underneath’ a diagnosis, at the symptom level, may lead to utility for other psychiatric illnesses in the short term and perhaps to more personalized medicine approaches to DBS in the longer term.”

Several of the authors have applied for patents on technologies related to DBS and modulation of oscillations.

The study was funded by The Brain & Behavior Research Foundation, the Picower Family Foundation, the MIT Picower Institute Innovation Fund, The National Institutes of Health, and the Defense Advanced Research Projects Agency.

Anesthesia doesn't simply turn off the brain, it changes its rhythms

As you look around, mental images bounce between right and left brain

February 8, 2021
Research Findings
As you look around, mental images bounce between right and left brain
New study explains how the brain helps us remember what we’ve seen, even as it shifts around in our visual system
Read more
Research Article