Anesthesia doesn't simply turn off the brain, it changes its rhythms

In a uniquely deep and detailed look at how the commonly used anesthetic propofol causes unconsciousness, a collaboration of labs at The Picower Institute for Learning and Memory at MIT shows that as the drug takes hold in the brain, a wide swath of regions become coordinated by very slow rhythms that maintain a commensurately languid pace of neural activity. Electrically stimulating a deeper region, the thalamus, restores synchrony of the brain’s normal higher frequency rhythms and activity levels, waking the brain back up and restoring arousal.

“There’s a folk psychology or tacit assumption that what anesthesia does is simply ‘turn off’ the brain,” said Earl Miller, Picower Professor of Neuroscience and co-senior author of the study in eLife. “What we show is that propofol dramatically changes and controls the dynamics of the brain’s rhythms.”

Conscious functions, such as perception and cognition, depend on coordinated brain communication, in particular between the thalamus and the brain’s surface regions, or cortex, in a variety of frequency bands ranging from 4 to 100 Hz. Propofol, the study shows, seems to bring coordination among the thalamus and cortical regions down to frequencies around just 1 Hz.

Miller’s lab, led by postdoc Andre Bastos and former graduate student Jacob Donoghue, collaborated with that of co-senior author Emery N. Brown, who is Edward Hood Taplin Professor of Medical Engineering and Computational Neuroscience and an anesthesiologist at Massachusetts General Hospital. The collaboration therefore powerfully unified the Miller lab’s expertise on how neural rhythms coordinate the cortex to produce conscious brain function with the Brown lab’s expertise in the neuroscience of anesthesia and statistical analysis of neural signals.

Brown said studies that show how anesthetics change brain rhythms can directly improve patient safety because these rhythms are readily visible on the EEG in the operating room. The study’s main finding of a signature of very slow rhythms across the cortex offers a model for directly measuring when subjects have entered unconsciousness after propofol administration, how deeply they are being maintained in that state, and how quickly they may wake up once propofol dosing ends.

“Anesthesiologists can use this as a way to better take care of patients,” Brown said. 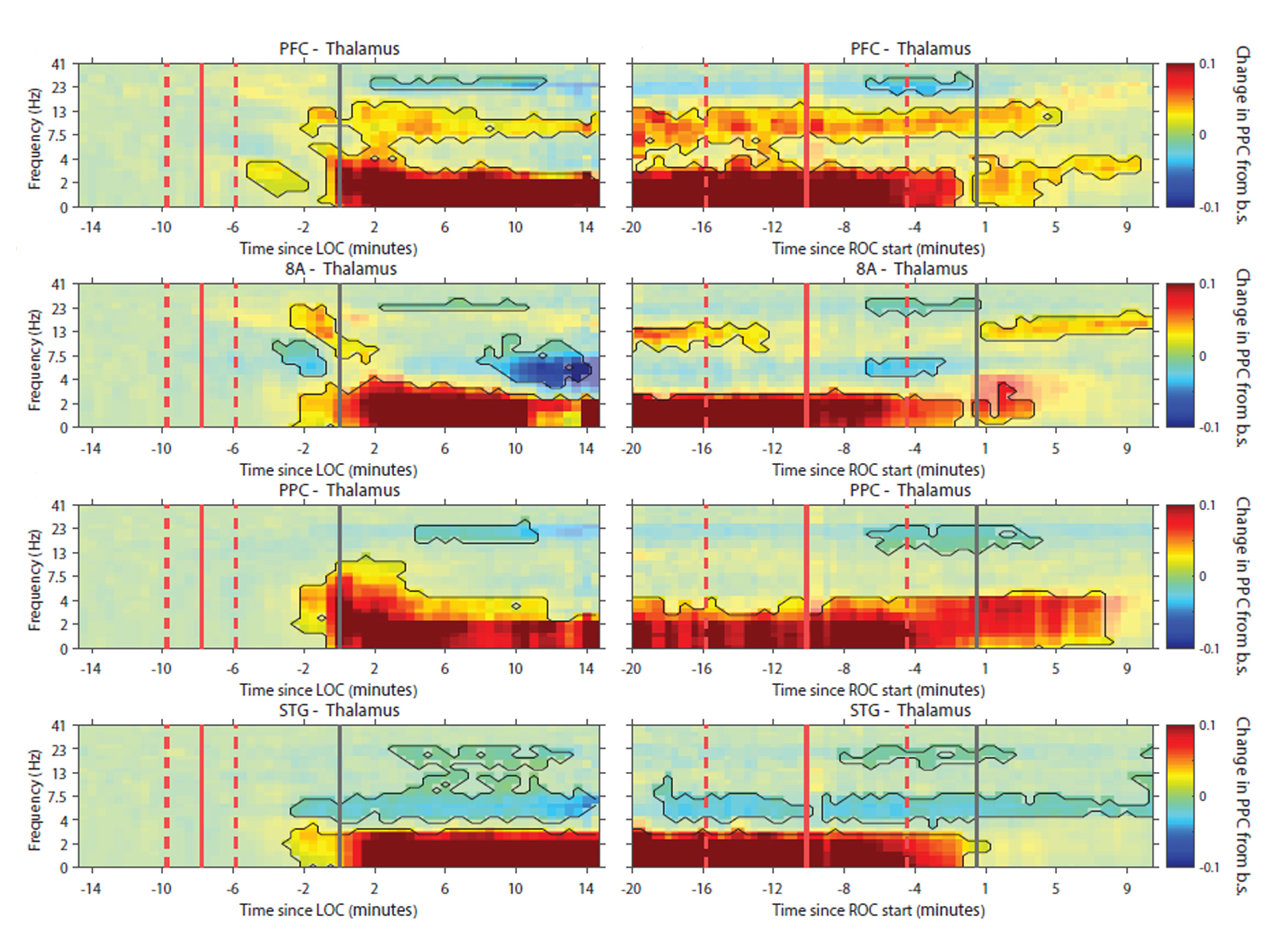 Data from the research shows strong increases in synchrony only in very slow frequencies (deep red color) between the thalamus and four cortical regions.

Brown has long studied how brain rhythms are affected in humans under general anesthesia by making and analyzing measurements of rhythms using scalp EEG electrodes and to a limited extent, cortical electrodes in epilepsy patients. Because the new study was conducted in animal models of those dynamics, the team was able to implant electrodes that could directly measure the activity or “spiking” of many individual neurons and rhythms in the cortex and thalamus. Brown said the results therefore significantly deepen and extend his findings in people.

For instance, the same neurons that they measured chattering away with spikes of voltage 7-10 times a second during wakefulness routinely fired only once a second or less  during propofol-induced unconsciousnesss, a notable slowing called a “down state.” In all, the scientists made detailed simultaneous measurements of rhythms and spikes in five regions: two in the front of the cortex, two toward the back, and the thalamus.

“What’s so compelling is we are getting data down to the level of spikes,” Brown said. “The slow oscillations modulate the spiking activity across large parts of the cortex.”

As much as the study explains how propofol generates unconsciousness, it also helps to explain the unified experience of consciousness, Miller said.

“All the cortex has to be on the same page to produce consciousness,” Miller said. “One theory about how this works is through thalamo-cortical loops that allow the cortex to synchronize. Propofol may be breaking the normal operation of those loops by hyper synchronizing them in prolonged down states. It disrupts the ability of the cortex to communicate.”

For instance, by making measurements in distinct layers of the cortex, the team found that higher frequency “gamma” rhythms, which are normally associated with new sensory information like sights and sounds, were especially reduced in superficial layers. The increase in slow wave power during unconsciousness was especially strong in the deep layers of cortex, which Miller has shown tend to regulate the processing of the information carried by gamma rhythms.

In addition to the prevailing synchrony at very slow frequencies, the team noted other signatures of unconsciousness in the data. As Brown and others have observed in humans before, alpha and beta rhythm power was notably higher in posterior regions of the cortex during wakefulness, but after loss of consciousness power at those rhythms flipped to being much higher in anterior regions.

The team further showed that stimulating the thalamus with a high frequency pulse of current (180Hz) undid propofol’s effects.

“Stimulation produced an awake-like cortical state by increasing spiking rates and decreasing slow-frequency power,” the authors wrote in the study. “In all areas, there was a significant increase in spiking during the stimulation interval compared to pre-stimulation baseline.”

The National Institutes of Health and the JPB Foundation provided funding for the study.

Wired: This Is Your Brain Under Anesthesia
The Science 7: Unconsciousness and Anesthesia

Holding information in mind may mean storing it among synapses

December 29, 2022
Research Findings
Holding information in mind may mean storing it among synapses
Comparing models of working memory with real-world data, MIT researchers found that information resides not in persistent neural activity, but in the pattern of their connections
Read more
Research Article

Are covid ‘comas’ signs of a protective hibernation state?

November 7, 2022
Research Findings
Are covid ‘comas’ signs of a protective hibernation state?
Scientists hypothesize that, as in a hibernating turtle, the brain under sedation and deprived of oxygen may assume a protective state
Read more
Research Article