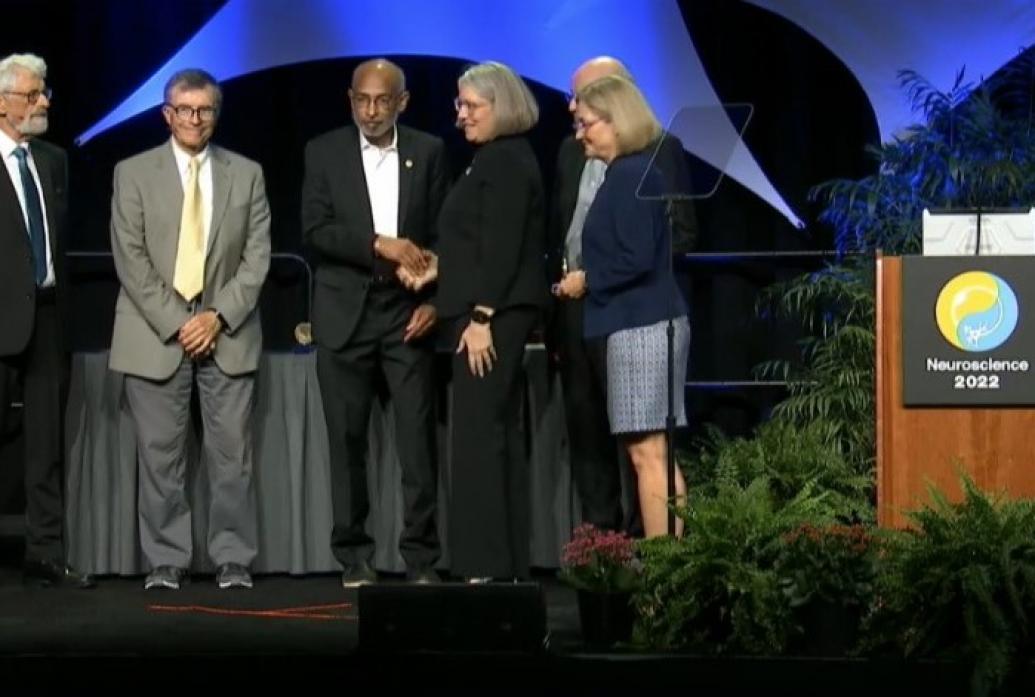 At Neuroscience 2022, Emery N. Brown relayed how statistical analysis of brain rhythms in patients and animals under anesthetics has revealed important information about how the drugs work.

At the Society for Neuroscience Annual Meeting Nov. 13, Emery N. Brown took to the main stage to demonstrate how neuroscience and statistics are taking the mystery out of anesthesia and replacing it with useful, actionable insight to improve patient care.

Brown, Edward Hood Taplin Professor of Computational Neuroscience and Medical Engineering at MIT, spoke after he and three colleagues accepted this year’s Gruber Prize in Neuroscience for their applications of physics, statistics and computing to interpret the field’s increasingly large and complex datasets. For Brown, who is also an anesthesiologist at Massachusetts General Hospital and Harvard Medical School, much of the data analysis he has pioneered has been in the service of understanding how anesthetic drugs act in the brain.

“It’s often said that it’s not clear how anesthesia works, but nothing could be further from the truth,” said Brown, a faculty member in MIT’s Picower Institute for Learning and Memory, Institute for Medical Engineering and Science, and Department of Brain and Cognitive Sciences. “Anesthetics work by creating oscillations in brain circuits that impair the communication between different brain regions.”

Above: Emery N. Brown receives a handshake after accepting his share of the 2022 Gruber Prize in Neuroscience at the Society for Neuroscience Annual Meeting in San Diego Nov. 13.

Brown presented data from several of his papers in which he and colleagues have systematically measured and analyzed EEG recordings from patients in the operating room and also animals undergoing general anesthesia induced by various drugs. The studies have yielded distinct “signatures” of brain rhythms from each medication and shown how they vary in patients based on their age and health status.

For instance, during propofol anesthesia, which targets inhibitory GABAergic neurons deep in the brain, coherence between brain regions such as the cortex and thalamus becomes dominated by very slow waves and a much slower pace of neuronal spiking, Brown said. The loss of coherence among higher frequencies cuts off communication around the brain, leading to unconsciousness. Ketamine, which targets both inhibitory and excitatory neurons, shows a different pattern characterized by transitions between slow waves and much higher frequency ones, but these highly altered dynamics also prevent typical communication among regions.

“There are different dynamical signatures for anesthetics with different mechanisms of action,” Brown said.

Brown has become a leading advocate for anesthesiologists to directly read out these brain signals to better monitor and dose patients during surgery. Doing so, he has said, can reduce side effects from using more drug than is necessary to maintain the anesthetic state.

Establishing a neuroscience-based understanding of anesthetics can not only help improve patient care but also the drugs themselves.

“We have to change our mindset,” he said. “We have to start basing our thinking more soundly on neuroscience because after all the drugs are acting in the brain. Ironically we have standards to monitor heart rate, blood pressure, oxygen saturation, and C02 delivery, but we have no standards that require you to monitor the brain.

“Just to show you how much work there is to be done, we haven’t had a new anesthetic in 30 years,” he said.

Are covid ‘comas’ signs of a protective hibernation state?

November 7, 2022
Research Findings
Are covid ‘comas’ signs of a protective hibernation state?
Scientists hypothesize that, as in a hibernating turtle, the brain under sedation and deprived of oxygen may assume a protective state
Read more
Research Article